What is my dissertation about? I'm so glad you asked, Center for European Studies

drawings for poems from Jay Wright's Music's Mask and Measure (2007) 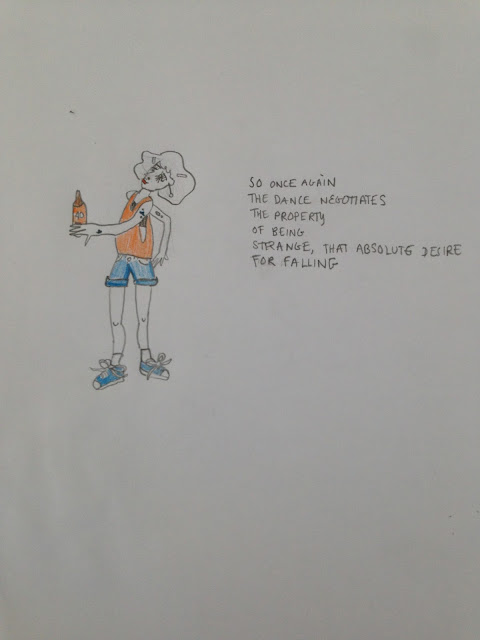 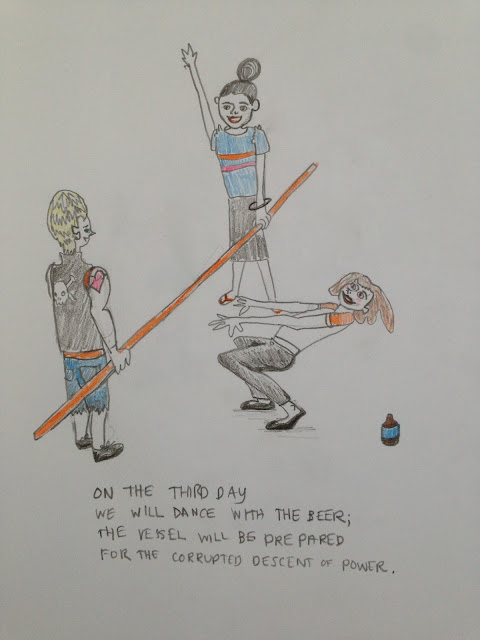 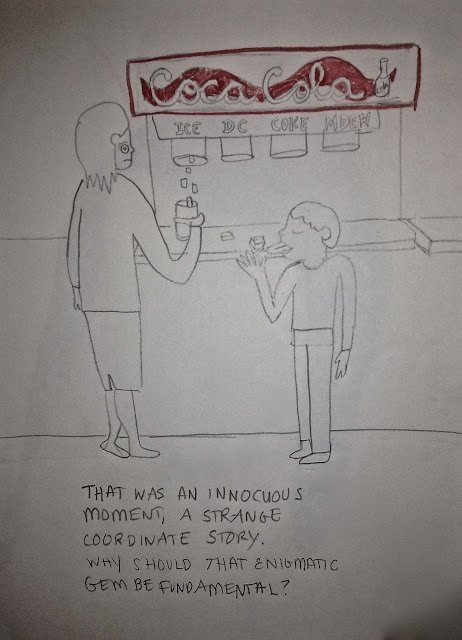 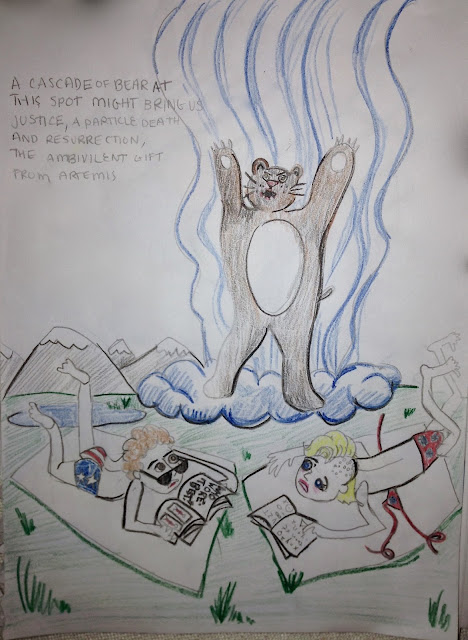 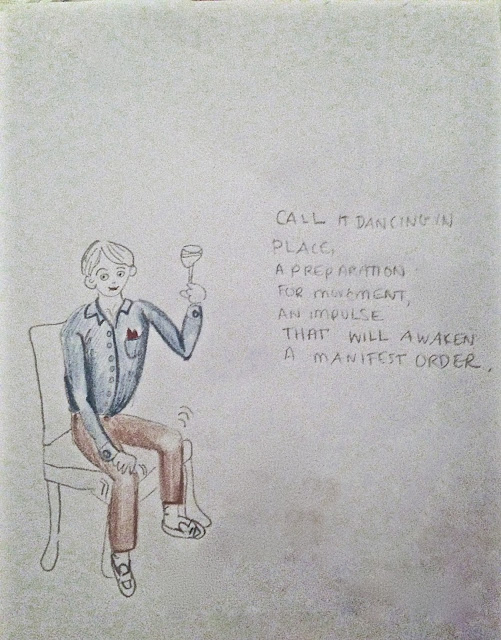 I interpreted these poems literally and probably badly during dinner at a friend's wedding (drawing was encouraged, I was only being slightly antisocial)

For one of our last lectures this summer, I was lucky to have the artist and creative consultant Carson Salter Skype in a guest lecture for the section called "Artist as Entrepreneur? Post-Critical Art and The (Ironic) Embrace of Finance and Consumer Culture." Here's an action shot of us setting up the projector, with Carson and his slide show pictured in the top corner, me in the foreground consuming the drink of champions, Diet Coke, and a few of my students behind me. 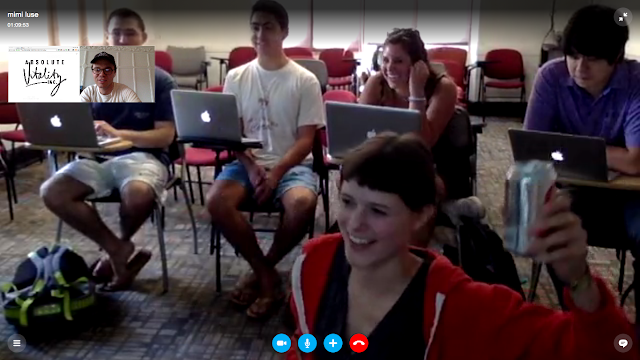 I have wrapped up teaching "Art, Money and Labor in Art and Art Criticism from 1830 to Today” (ARTH 290-02/ ECON 390-02 Special Topics) for summer session 1 at Duke. The aim of the course was to explore how the contradiction between artistic ethics and monetary value has been expressed in art criticism and studio practice from the nineteenth century onwards, integrated as it was into polemical writings and the theoretical percepts of artistic production. Topics covered in this course included debates over art and craft, representations of artistic and non-artistic labor, avant-garde critiques of the art object, institutional critique, the “art market critique,” relational aesthetics and affective labor, conceptual and non-commercial art works, and 'net art.' Readings were culled from historical as well as contemporary sources, including the writings of Karl Marx, Immanuel Kant, John Ruskin, Guy de Bord, Lucy Lippard, Boris Groys, Claire Bishop, and Claire Fontaine.

Though every teaching experience is a learning experience, during this course I learned two important things.

1. The first is to trust your students. Though I had originally conceived of this course as an advanced-level seminar, I had to lessen the reading load when I saw that few of my enrolled students had taken an art history class before. To do this while still providing a rigorous course load was hard, l but I decided to give my students the credit they deserved and kept the tough stuff in to see how they would deal with it. It sounds intuitive, but this was made easier by devoting the beginning of the course and to a very select group of theorists and key concepts: Kant, Marx, Benjamin, and historical narratives of art history given by Peter Bürger. Spending a generous amount of class time on crucial themes and key terms helped pave the way for understanding, and by the end of the course students felt comfortable with terms like "autonomy" and "labor theory of value" which, we all know, are ubiquitous in contemporary art readings.

2. My course was originally intended to be a  "special topics" course focused on critiques of commodity capitalism in the arts, but I quickly discovered that the class functioned just as well as an introduction to the history of modern and contemporary art, that is, that one can provide a very compelling narrative of modern and contemporary art through this single thread of inquiry.

"The rest of the book is too mediocre to occupy us."

... His aesthetic is grounded on absolutely nothing; therefore all the criticisms we can heap on Cousin, we can repeat with even more severity when judging the aesthetic of Lamennais... :

.... We could not cite the passages in which this [ aftorementioned] idea is developed, because one would have to copy the entire book....

This scholar Théodore M. Mustoxidi was author of only one other book – Qu'est-ce que la mode? also of 1920.
No comments: 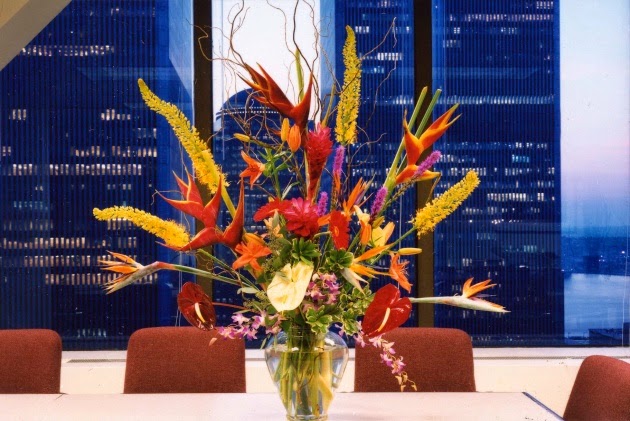 Aleksandra Mir being interviewed here on how the 'prophecies' of her book, Corporate Mentality (2003, pdf) are being fulfilled ten years later through cultural entrepreneurship courses, much like the one being created at my own university, and the one she mentions here:

"...I recently learned that the art school Central Saint Martins is offering a graduate degree in 'Innovation Management,' with the purpose to 'synthesize opportunities.' This is perhaps the closest to the Ford and Davies 1998 Art Futures prediction of the Culturepreneur. I find it hilarious that we have arrived at this. It is a symptom of an ever growing culture industry with lots of room for middle managers in it of course. Yet, I believe that no matter what forces or structures are in place, the art itself still always stems from a sensitive and delicate source, willing to take risks and thrive, not thanks to, but despite the odds."

Whereas contemporary artist collectives like K-HOLE or DIS magazine follow after collectives like the NE Thing Co, General Idea or Bernadette Corporation in their parody of corporate structures and jingoism (what writer Huw Lemmey calls the "language of dickheads") what distinguishes them is their apparent willingness to enter fully into the world they parody and profit from it – staking out a position of critique and at the same time profiting from that position when ostensibly selling their cultural savvy back to clients.  In light of what critics have called the 'capitalist realism' of today's contemporary art, and its negative image – the well-intentioned "girl meets oil" cases of the corporate world – the point past which all differences between sincerity and cynicism can no longer be restored is both poetic and horrific territory.

"Art, Conflict & The Politics of Memory" Part I 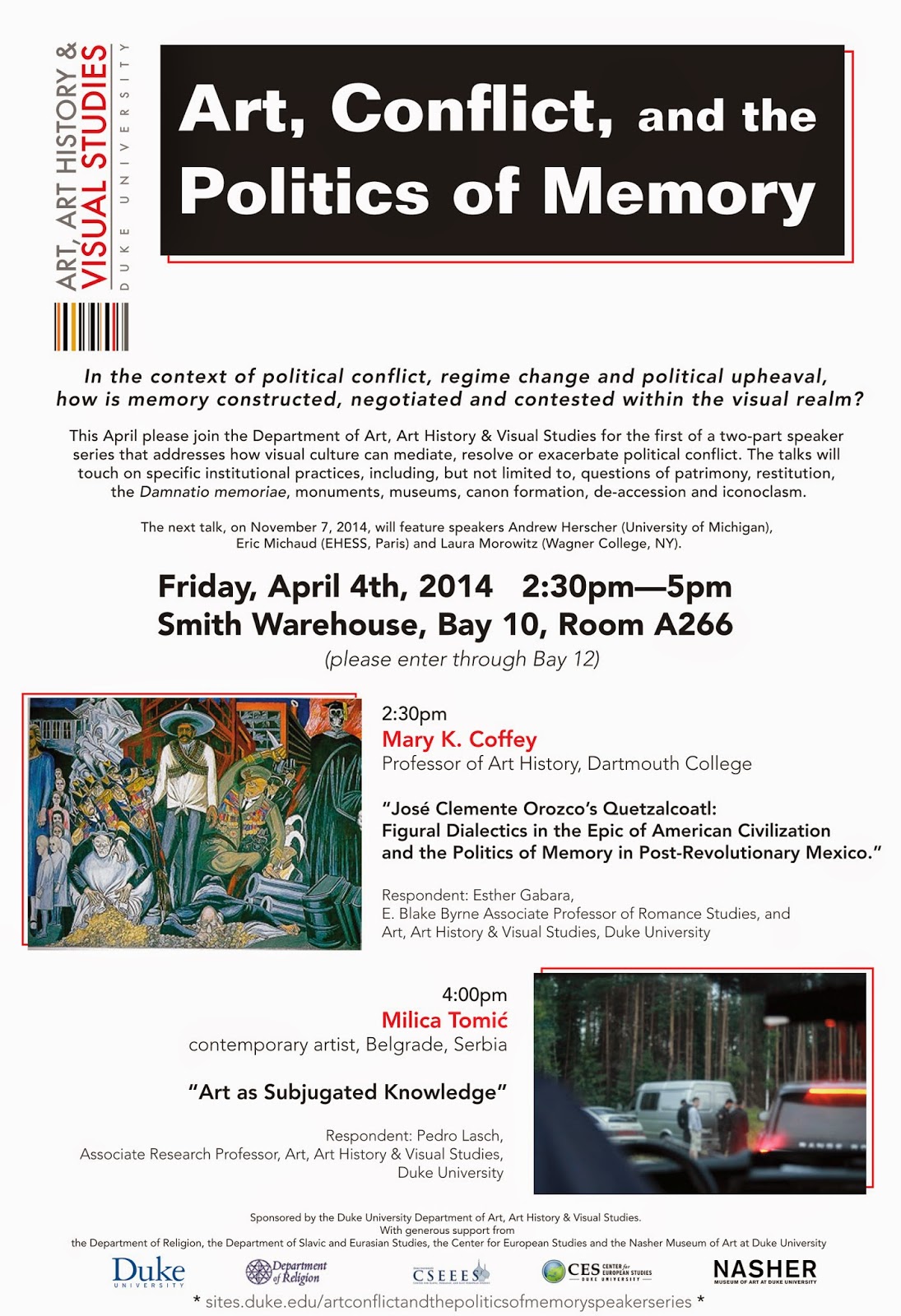 Part I of the Art, Art History & Visual Studies Doctoral Student Speaker Series, "Art Conflict and the Politics of Memory," organized by Ivana Bago, Laura Moure Cecchini and I. Link here. Photos below. 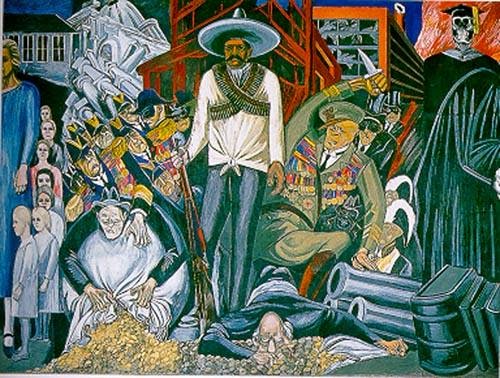 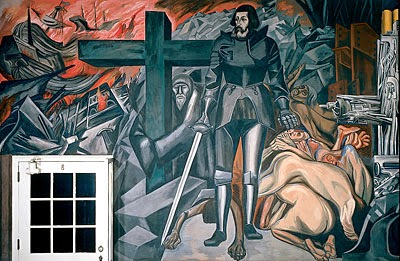 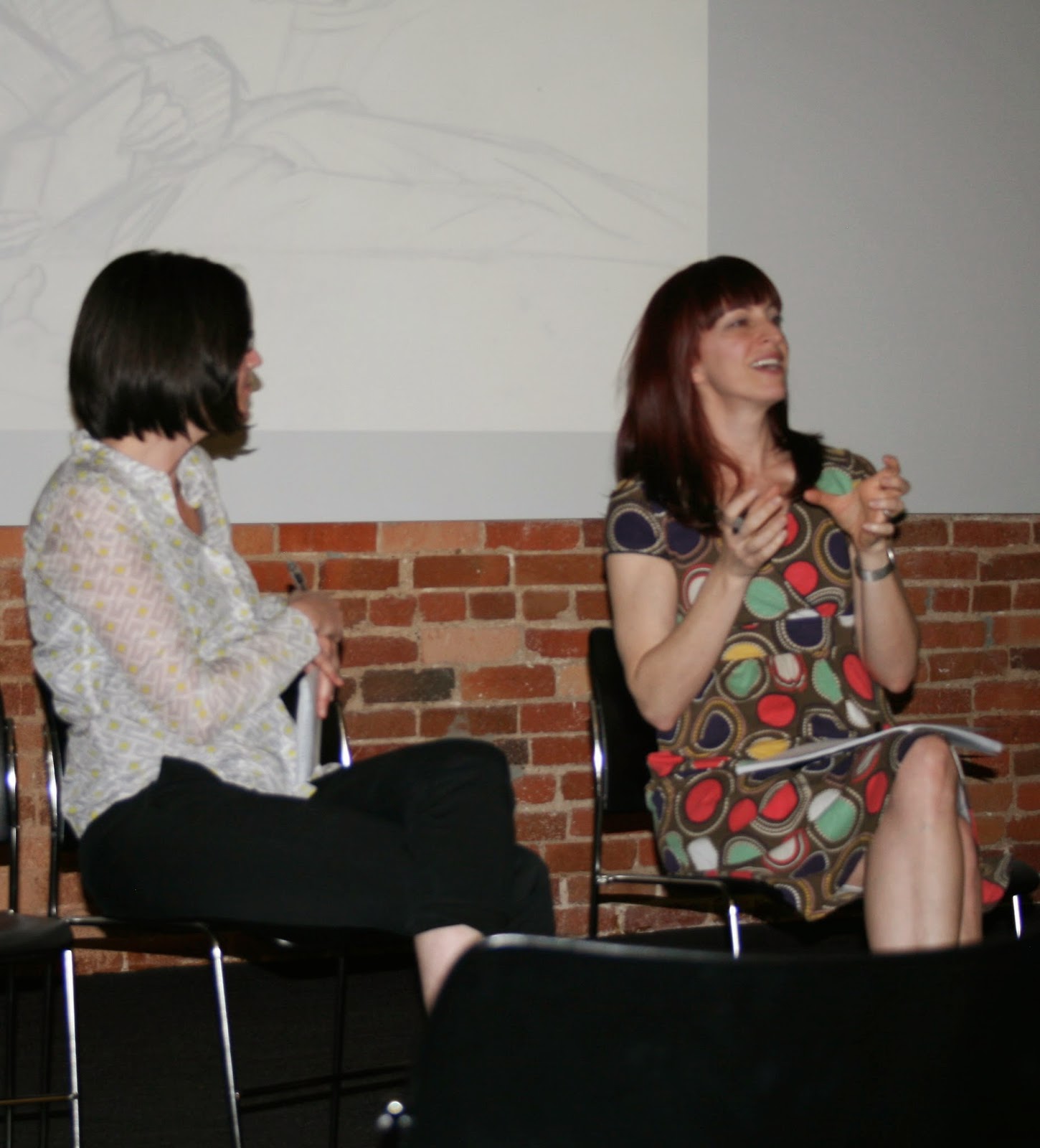 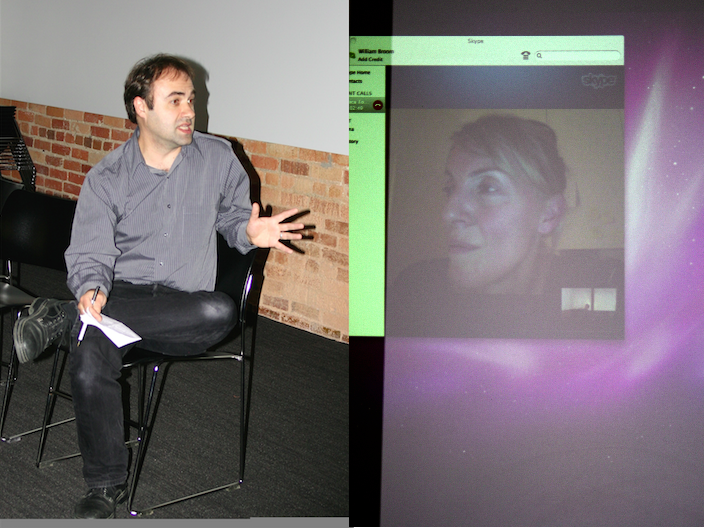 Duke Professor Pedro Lasch Syking with the activist and artist Milica Tomić. Below,
Milica Tomić,  “Container” image from a Forensic Performance –(Re) Construction of the Crime. 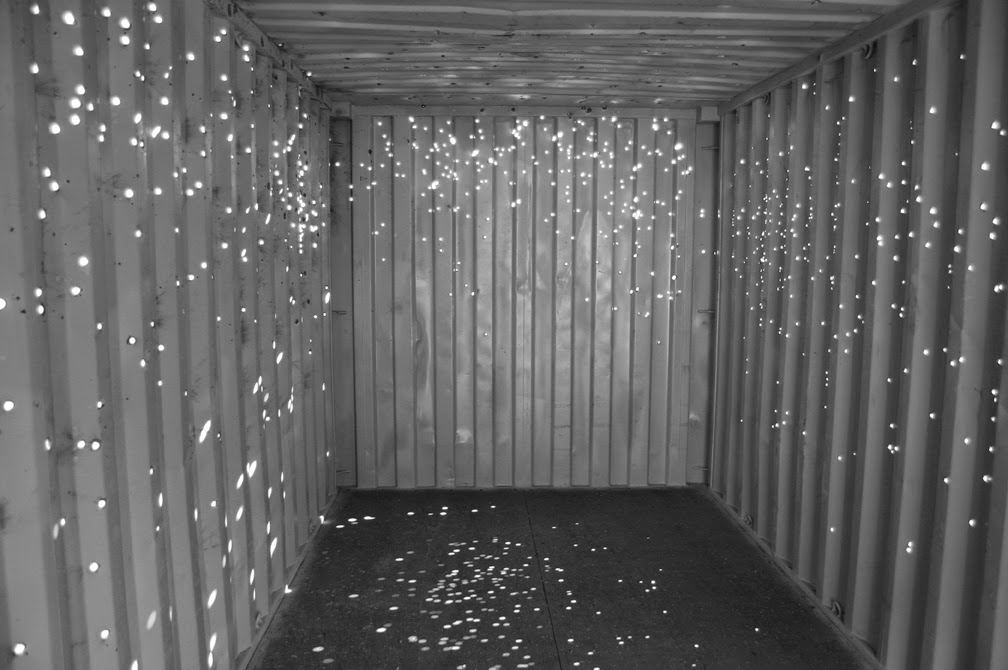 Some heartening (?) thoughts c/o Deleuze the night before I leave for the CAA Conference.

....or some other sort of angry display.

and talking is dirty.... But nothing is so shameful as the intellectuals who travel only to do so.
No comments:

Time to hit the books

oldest trick in the book

We are not the ones using obscure language: intellectuals in Godard's La Chinoise

I get excited about banknotes but more exciting than official banknotes are emergency banknotes. From the days when Germans used wheelbarrows as purses:

"Notgeld (emergency currency) was issued by cities, boroughs, even private companies while there was a shortage of official coins and bills. Nobody would pay in coins while their nominal value was less than the value of the metal. And when inflation went on, the state was just unable to print bills fast enough. Some companies couldn't pay their workers because the Reichsbank just couldn't provide enough bills. So they started to print their own money - they even asked the Reichsbank beforehand. As long as the Notgeld was accepted, no real harm was done and it just was a certificate of debt. Often it was even a more stable currency than real money, as sometimes the denomination was a certain amount of gold, dollars, corn, meat, etc."

These are all from the flickr site of Miguel Oks.
(Thanks to Michael Shick for sending these my way). 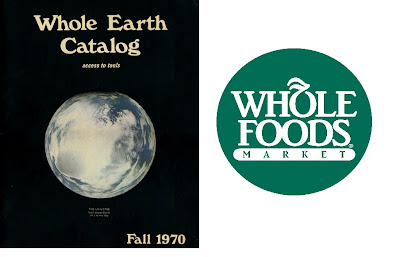 My growing collection of tracts and manuals from the yippie and intentional communities movements from the seventies was recently entered into a Rare Book Competition at Duke. My collection, most of which I'd picked up in used book-shops, included Jerry Rubin’s Do it! (1970), Viktoras Kulvinskas’ paranoiac Survival into the 21st Century (1975) Robert de Ropp’s meticulously detailed homesteading manual, Eco-Tech (1975), and of course Stuart Brand’s meta-database The Whole Earth Catalog (1971) which is currently the conceit for a great exhibition curated by Diedrich Diederichsen and Anselm Franke at the Haus der Kulturen der Welt.

In my statement I wanted to explain my appeal for these books, describing my interest in the "how-to" manual as a genre. As the ancestor of the homesteading manual and the precursor of the DIY zine (or now, more generically, about.com) the "manual" quite radically cuts out the middle-man and the expenses of training.

However, I also wanted to show the other secret attraction of these books, which is that the manual also allows for the formation of an alternative identity, functioning as an aide in self-actualization/ transformation.

Ironically, it is to this very radical movement of intentional communities that we owe the greenwashed environmentalism of today. I stressed that perhaps the manuals were almost too effective, and that eventually, the radical subjectivities associated with the intentional communities movement were commodified, its fonts and design sensibilities were raided. The middle man was brought back into the picture, not as Whole Earth but as "Whole Foods".